Of the thousands of armored vehicles delivered by TAC, thankfully only a small percentage ever take fire. When our vehicles are attacked, the circumstances of the assault are almost always held in strict confidence and we’re unable to share the story.
However, below you’ll find two case studies where vehicles were attacked on separate occasions in Iraq—pictures are included to demonstrate how TAC products stand up against even the most severe real-life attacks.

While a quality armored vehicle may be expensive, it’s clear from the examples below that it only takes one terrifying moment to justify the cost. After all, can you really put a price on human life?

The following case study gives details on an armored Suburban built by Texas Armoring Corporation that was hit by two simultaneous Improvised Explosive Devices (IEDs) in Iraq. Chad Stone, an American Police Officer working for Dyncorp, was driving the vehicle at the time of the attack. Here is Chad’s story:

The following case study gives details on an armored Suburban built by Texas Armoring Corporation that was hit by two simultaneous Improvised Explosive Devices (IEDs) in Iraq. Chad Stone, an American Police Officer working for Dyncorp, was driving the vehicle at the time of the attack. Here is Chad’s story:

I was driving an armored Suburban built by Texas Armoring as part of a five vehicle convoy in Iraq. My contract was coming to an end and this was to be my last day outside the wire. We had just cleared an Iraqi checkpoint when suddenly two IEDs went off simultaneously on my side of the vehicle. 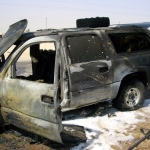 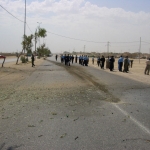 The resulting blast was strong enough to destroy the engine and set the vehicle on fire. Although the tires of the vehicle were completely destroyed, the run-flat inserts installed on the wheels allowed it to keep rolling out of the ‘kill-zone’. It seemed like the vehicle was rolling forever before it finally came to a stop. My partner and I were able to safely exit and take cover while we awaited the arrival of back-up support provided by the Army.

These pictures of the armored Suburban show the severity of the blast. If the vehicle had not been armored, Chad Stone and his partner would not have survived. The bulletproof glass, ballistic steel, and light-weight composite armor performed as expected and shielded the vehicle’s occupants from the blast. Additionally, the run-flat tire inserts worked as designed and allowed the disabled vehicle to roll to safety while the rest of the convoy provided support. 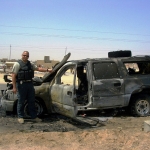 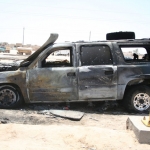 Later, a Sergeant who witnessed the explosion expressed his awe in the fact that my partner and I were able to survive such a large blast. It was my last day in the most dangerous area of Iraq, and the armored vehicle I was driving allowed me to return home safely to my wife of 14 years and two daughters.

Texas Armoring Corporation takes great pride in producing products that save save lives. To share your story, contact us at tac@texasarmoring.com.

We’re often asked, “How do your vehicles fair in a real-life attack situation?” While most of our clients prefer not to go on the record (for obvious privacy and security reasons), one of them did recently send us the following pictures of a vehicle they purchased: 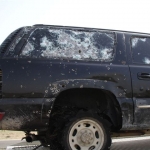 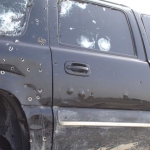 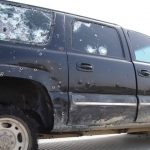 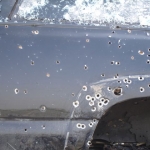 The vehicle above fell victim to an IED/roadside bomb attack in Iraq. Despite the appearance of massive external damage, there was absolutely no penetration to the passenger compartment—all six passengers survived and walked away. While we don’t certify our vehicles against IED attacks, this vehicle is an example of the real-life protection that TAC armored vehicles can provide.

Our TAC armored vehicle protected me and my family—we wouldn’t trust anyone else with our lives.

My TAC armored Mercedes-Benz saved my life. Over 100 shots were fired and nothing passed through the armor. I’ve ordered another vehicle for my wife, and I’m definitely glad I chose Texas Armoring to bulletproof my vehicle.